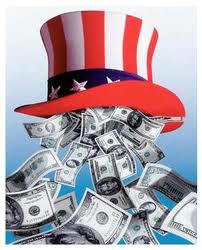 “If those in charge of our society—politicians, corporate executives, and the owners of press and television—can dominate our ideas, they will be secure in their power. They will not need soldiers patrolling the streets. We will control ourselves.”—Howard Zinn

“If you tell a lie big enough and keep repeating it, people will eventually come to believe it . . . It thus becomes vitally important for the State to use all of its powers to repress dissent, for the truth is the mortal enemy of the lie, and thus by extension, the truth is the greatest enemy of the State.”—Joseph Goebbels, Minister of Propaganda of the former Third Reich

Perhaps the biggest single lie perpetrated upon everyday ordinary people of all colors in the United States is that the corporate owned, symbiotically-joined, Democrat and Republican parties genuinely represent them, their needs, interests, hopes, and aspirations.

Due to the repeated lies of disinformation and misinformation propagated by the apparatus of the corporate-political State, which apparatus includes but is by no means limited to the corporate-stream ‘news and analysis’ media (i.e., “press and television,” etc), the masses of everyday ordinary people have consistently fallen prey to the insanity of the mantra of repeated lies from the systemic, corporate-owned Democrat and Republican parties and their insidious and opportunistic collaborators and operatives.

The reason that the corporate U.S. government maintains over 800 military bases worldwide, and in real terms, simultaneously quashes the human/civil rights and legitimate hopes and dreams of everyday people inside this nation and throughout Mother Earth can be accurately summed up in three words: arrogance, power, and insatiable corporate greed. This has nothing whatever to do with sound bites and buzzwords such as “freedom,” “justice,” or “democracy,” etc. It’s about arrogance, power, and greed—all at the horrible expense—of everyday Black, White, Brown, Red, and Yellow people in this nation and around the world.

U.S. perpetual wars and/or military interventions mean perpetual profit for the bloodsucking Wall Street corporate elite. The words of the late Hermann Goering, the fascist 20th century Third Reich’s former Air Minister and Supreme Commander of the Air Force (Luftwaffe), remain chillingly relevant and informative in this regards. He said, “Naturally the common people don’t want war; neither in Russia, nor in England, nor in America, nor in Germany. That is understood. But after all, it is the leaders of the country who determine policy, and it is always a simple matter to drag the people along, whether it is a democracy, or a fascist dictatorship, or a parliament, or a communist dictatorship. Voice or no voice, the people can always be brought to do the bidding of the leaders. That is easy. All you have to do is to tell them they are being attacked, and denounce the pacifists for lack of patriotism and exposing the country to danger. It works the same in any country.“

Of course if the leaders of the Third Reich and Mussolini’s fascist Italy were alive today, they would probably be astounded and no doubt green with envy to see how insidiously effective the Democrats and Republicans of this 21st century corporate-owned U.S. government, in concert with their corporate-stream ‘news’ media (propaganda machine), have in actuality, utilized, tweaked and indeed expanded upon the afore quoted words of Hermann Goering.

Behold! Corporate so-called ‘personhood,’ the unconstitutional ‘PATRIOT Act’ and the draconian and totalitarian NDAA, combined with Barack Obama’s secret ‘Kill List,’ have all been brought to us by the both the corporate Democrats and Republicans, and represent this nation’s 21st century headlong plunge into being a de facto 21st century totalitarian/police-State at home, and a crazed and bloody war machine abroad.

The big lie vigorously perpetuated today is that the everyday people of the United States are genuinely represented by the Democrats and Republicans, and by extension, have serious, strong, and lasting impact upon the “policy” decisions made by this nation’s so-called “leaders.” The “truth” is of course, just the opposite. Today, more so than ever before, “truth” remains “the greatest enemy” to this corporate-owned U.S. political “State” which State is managed and perpetuated by the treacherous corporate Democrats and Republicans. The very existence of the Democrat and Republicam parties is a mockery of, and insult to, the concept of “life, liberty, and the pursuit of happiness.” These Democrats and Republicans are a trick-bag of distractions, lies and liars, against people of conscience everywhere.

The murderous military ‘shock and awe’ campaign (predicated upon non-existent so-called Iraqi ‘weapons of mass destruction’), and the unconstitutional PATRIOT Act, etc., by the (Republican) George W. Bush regime, and subsequently, the horrendous Predator-drone missile attacks on North & East Africa, South Asia, and the ‘Middle East,’ the horrendous NDAA, and the undemocratic and repugnant ‘Kill List,’ etc., by the (Democrat) Barack Obama’s regime make it crystal clear that boththe Democrats and Republican parties are enemies of “truth,” in fact, enemies of the people.

Indeed, the unconstitutional and repressive actions at home, and the blood drenched military actions abroad, carried out by the reincarnated ‘imperial presidency’ of the Barack Obama regime make even the outrageous actions by the previous George W. Bush regime pale by comparison. The point is, however, that both the corporate-owned Democrats and Republicans are the enemies of everyday ordinary people inside the U.S. and throughout this planet of Mother Earth.

We must escape from the plantations/reservations of the Democrat and Republican parties; and we must get the blood of the peoples of the world off our hands! We must free our minds! We must do this by refusing to allow, in the words of Howard Zinn, these corporate political gangs to “dominate our ideas.” We individually and collectively must dominate our own ideas. The hell with the propaganda arm of the Democrats and Republicans, i.e., the corporate-stream media!

The simple truth of the ordinary everyday people in this nation is very much the “mortal enemy” of this disguised de facto 21st century corporate neo-fascist U.S. political State. We now know that this despicable unjust political system will continue to “use all of its powers to repress dissent.” But if we do not dissent and organize against these political gangsters this nation and quite possibly all of humankind will be doomed. On their side, these political gangsters have the corporate-stream media, lies, subterfuge, and of course brute force. On our side, we have the universal truth of our own humanity combined with that of the masses of people in this nation and throughout Mother Earth who are hungering and thirsting for a world based upon human needs—not corporate contrived wars and insatiable greed.

Wake up, NOW!!! Let us carry on and intensify in this long, arduous, and protracted struggle.

This is about we the people, not the bloodsuckers and tricksters of humanity who manipulate and mislead the people. Educate, organize, agitate! It is time for we the people of all colors, to collectively work with each other, defend each other, learn from each other, and take back our humanity together from these vampiric political gangsters. We CAN do this. We MUST do this! Can you hear her? Of course you can! It is the voice of our Mother Earth, and she is depending on us as we too depend upon her.

Remember: Each one, reach one. Each one, teach one. Onward, then, my sisters and brothers! Onward!