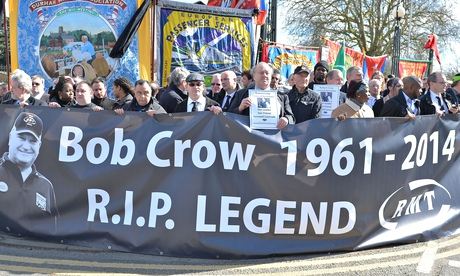 I was sitting in a fairly humdrum meeting of the London Midland NUR district council in 1989 when a large gentleman with shoulder length curly hair made his way to the rostrum. I didn’t recognise the man at all I worked for British rail at the time but a colleague whispered to me that’s Bob Crow from London Underground. The next ten minutes changed my life, Bob then a track worker on the underground and a communist Party member lambasted the Anti Union laws, the trade union leadership the bosses, the Tories, the cowardice of the (soon to become ) “New Labour party”and indeed the whole capitalist system. The whole room was electrified I had never heard such radical ideas put across in a way that I could understand and grasp instantly. The themes which Bob outlined so clearly in that speech became the tenants of our union and I would argue the legacy that Bob has left us following his tragic untimely death.

Bob was elected to the NUR National executive where he actively helped build a fighting left wing of the union. He believed correctly that the union membership would if convinced and given proper leadership and organisation be prepared and able to fight for decent pay terms and conditions even during the Thatcherite onslaught and threats of privatisation. Bob though was no Syndicalist he recognised the fact that workers needed political representation and if the Labour Party would not provide this then an alternative party would need to be formed . The Socialist Labour Party led by Arthur Scargill became for a time Bob’s vehicle in which he sought to build a party that would unequivocally support workers in struggle and working class interests in general. Bob left the SLP but never abandoned the fight for a workers party. He was instrumental in the formation of NO to EU which opposed the capitalist project of a united bosses Europe and also a strong supporter of the Trade Union and socialist coalition. Vilified as a Nationalist by some Bob stuck to his guns criticising a freemarket driven Europe whilst building links with workers organisations both in Europe and Internationally.

Bob never lived to see his cherished project of a real workers party accomplished but I believe that his vision in opposing Bureaucratic rule from Brussels and a yellow Labour Party in Britain must come about if workers to have any defence against international capital, British capital and its lackeys. The RMT in my view thanks to Bob’s leadership is a very strong model of industrial trade unionism. Organising everyone in the transport industry regardless of grade the RMT recognises that workers with more industrial strength are sometimes needed to win battles for those who are not so powerful. Although severely restricted by the Anti union laws brought in by the Tories and kept by Labour the RMT have managed to punch above its weight (80,000 members) and achieve real gains in pay terms and conditions even in the period of capitalist crisis, which they conveniently label the recession.

Bob believed passionately in organising everyone in our industry and his leadership led to the recruitment and organisation of, cleaners, catering workers and other groups that had been neglected since Rail privatisation. The resultant struggles led to the first ever award of the London living wage to cleaners on London Underground and this part of Bob’s legacy should be highlighted as an example to other unions that even in the most difficult conditions workers can be organised to fight and win. On the subject of the Anti Union laws Bob rightly believed and advocated that they should be broken. This was not just rhetoric and I stood with him on a picket-line which stopped workers from crossing, this was technically secondary action and was illegal. The anti union laws remain in place despite several New Labour governments and the current Labour leadership are not considering repealing them if elected. If legislative change is not on the agenda then unions must be prepared to break unjust laws after all if bad laws were always obeyed regardless the union movement would never have been formed in Britain, Bob always cited the example of how the Tolpuddle martyrs were deported for ostensibly swearing an Oath but in reality for organising a union.

In summary Bob Crows legacy is this, a vibrant socialist union in the RMT which organises on an industrial basis, fraternal international links with other unions, workers not bosses internationalism, the need to fight every social injustice and the need for proper political representation for working class people. Bob did not live to see a socialist Britain but has led us some way toward it if we continue in his footsteps we may yet build his most important Legacy an equal society where those whose labour provides the wealth receive their fair share of it.