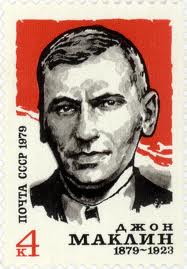 There’s a new exhibition entitled Scottish Working People’s History at the National Library of Scotland.  I suppose that the first question posed is the title itself.  It is worth noting that almost never will the term ‘working class’ now be used.  Let’s park that thought however.
The contents prodded my memory wonderfully.  There was the famous sepia photograph of John Maclean with the Tramps Trust in the early 1920s.  On the far right of the photograph was perhaps the youngest of the Red Clydesiders, Harry McShane, who, in his 80s, addressed the young socialist branch of which I was a teenage member in the 1960s.  Thus were human links created between my generation and that of the post-great war generation.
The deed of establishment of the Fenwick Weavers Society of 1761, one of the very earliest trade unions, was a reminder that early industrial organisation and radical politics had gone hand in hand.  A photograph of Keir Hardie appealing against the slaughter of the great war and a note on the life of Ramsay McDonald, reminding us that even he had stood solidly against the 1914-18 war, reiterated that link between labour politics and challenging the most powerful of forces.
There was a stock book from 1861-3 of the Brechin United Cooperative Society.  That grabbed my attention.  I come originally from Brechin.  My great-grandfather was active in the Cooperative movement there in the late 1890s and early 1900s and my father in the 1940s and 50s. My mother and grandmother were both members of the Co-op Women’s Guild which offered working-class women a secular fellowship which their men found in work.  As a boy I remember only too well the annual trek to the Co-op.  My mother collected her divi and purchased my school uniform for the year ahead.  I also know that in 1926 it was the Co-op which fed countless striking miners.  The Cooperative was a totally integral part of working-class daily life and of labour politics.  There was an intimate connection between the two.
I recall once asking my mother, who started working as a weaver in the linen factories in Brechin in the early 1930s, why she had always voted Labour.  Her explanation was both simple and illuminating.  ‘You were on piece work in the factories.  You couldn’t earn a living unless your loom worked.  The union lads made sure that they did.  You had to be in the union to survive in those days and the union lads were all Labour.  So we were.’  Again, there was an intimate connection between daily life in a working-class community and labour politics; no ideology, but a pragmatic understanding of the connection between daily life and larger matters.
There was also a quite splendid photograph of John Bird, a Fife miner and a communist, straight-backed, uniformed, mounted on a horse (with a seat to make any equestrian proud) and noted ‘Soldier of the great strike 1926’.  In many Fife communities in 1926, the strikers took over the maintenance of law and order.  Although those who called it had never envisaged it as such, the General Strike created an alternative locus of power and was a potential threat to the state.  Baldwin, Churchill and the ruling class realised that all too well.
Speaking of miners, another wonderful exhibit was a set of 1956 minutes from the most northern branch of the National Union of Mineworkers.  Now there’s a test.  Where would that have been?  Fife, perhaps?  No, Scotland’s most northerly pit was 190 miles to the north, at Brora in Sutherland, and it continued to produce coal until 1968.

There was a minute book from the Edinburgh Labour Party in 1910.  Seventy years later the minutes of Lothian Regional Labour Party, had they been on exhibition, would have been in my own hand. The item which moved me most was a membership certificate, from the inter-war period, of the Socialist sunday school.  ‘We children,’ it said, ‘of the Socialist sunday school welcome you as a scholar and as a worker for the cause of socialism.’  So much is encapsulated in that sentence.  There was a value placed in scholarship.  It was not what learning gave you; it was not about impacts or career opportunities.  Learning was good in itself.  And socialism was a cause: not a means to an end, but a cause.  There were posters from the National Council of Labour Colleges and the Workers Educational Association with a clear message that knowledge and learning were treasured in the Labour movement.
It is a truly historic exhibition, not only because it celebrates history but because it notes what is now past.  That Labour movement which it portrays is as defunct as John Maclean’s homburg hat.
There is no doubt that much of it was myth.  ‘Red Clydeside’ was far more pragmatic, from a trade union perspective, not to mention more patriotic, than Maclean’s rhetoric asserted.  The Bevanite left of the 50s and 60s was as much a product of that generation’s experiences of poverty in the 1930s and of war-time collectivism than of any commitment to the eradication of capitalism.  It may well even be that the Labour movement’s commitment to education, to scholarship and to knowledge as a route to liberation, was the ideology, not of the broad working class, but of its upper echelons, a recognition of how best to catapult its brighter sons and daughters to previously unimagined levels of security and comfort.
Even, however, if all of that is true, even if the foundations on which old Labour rested were much less secure and ideologically solid than the romantics would suggest, the NLS’s exhibition poses hard questions.    The headquarters of that Brechin Equitable Cooperative Society, mentioned earlier, bears a plaque: ‘They builded better than they knew’.  It implies both an intuitive understanding of what underpins society and a vision to improve it.  Clause IV may have been a crude depiction of how society ought to be organised but it expressed the vision of a more just and equal society and asserted that market forces were the antithesis of both justice and equality.  That vision is entirely missing from contemporary Labour politics.
Thatcher accelerated a process which globalisation was impelling, the de-industrialisation of much of the west.  Labour, under Blair and Mandelson, (‘We are intensely relaxed about people getting filthy rich.’) reinforced that process.  With the marginalisation of productive industry and the subsequent demise of economically powerful trade unionism, the old Labour movement would have changed irrespective of who were in charge of the unions or the Labour Party.
The old hand-written minutes, in exemplary copper-plate, have been overtaken by today’s word-processed documents, not read in ponderous tones at the commencement of meetings but pre-circulated by email.  Learning and education today are more accessible but offer less of a guarantee of economic advancement and security and are less valued.  In all these senses there is no returning to what once was.
Yet some return is essential: to the concept of a cause and not merely to a pragmatic means to ends, to a love of fellowship and cooperation and a rejection of the worship of the market.  There might also be a return to the tradition which assumed that war was almost always wrong.  Those who chose deliberately to separate labour politics from both the daily life of working people and a commitment to ethical politics should visit the NLS and view the rich tradition they jettisoned.

This article appears in The Scottish Review