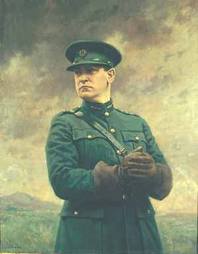 Michael Collins was shot dead 90 years ago today. Below is the 1973 Kenneth Griffiths film Hang Up Your Brightest Colours, which was originally suppressed by British censors. Also below is the poem by Brendan Behan, written when he was thirteen, in memory of Collins who was a personal friend of Behan’s mother and it is named after her nickname for him, The Laughing Boy. Finally there is the Black 47 song The Big Fellah which offers a republican critique of Collins’ political judgement.

The Laughing Boy by Brendan Behan

T’was on an August morning, all in the dawning hours,
I went to take the warming air, all in the Mouth of Flowers,
And there I saw a maiden, and mournful was her cry,
‘Ah what will mend my broken heart, I’ve lost my Laughing Boy.

So strong, so wild and brave he was, I’ll mourn his loss too sore,
When thinking that I’ll hear the laugh or springing step no more.
Ah, cure the times and sad the loss my heart to crucify,
That an irish son with a rebel gun shot down my Laughing Boy.

Oh had he died by Pearse’s side or in the GPO,
Killed by an English bullet from the rifle of the foe,
Or forcibly fed with Ashe lay dead in the dungeons of Mountjoy,
I’d have cried with pride for the way he died, my own dear Laughing Boy.

My princely love, can ageless love do more than tell to you,
Go raibh maith agat for all you tried to do,
For all you did, and would have done, my enemies to destroy,
I’ll mourn your name and praise your fame, forever, my Laughing Boy.

Mo chara is mo lao thu!
(My friend and my calf)
Is aisling trí néallaibh
(A vision in dream)
Do deineadh aréir dom
(Was revealed to me last night)
IgCorcaigh go déanach
(In Cork, a late hour)
Ar leaba im aonar
(In my solitary bed)

I remember you back in the GPO with Connolly and Clarke
Laughin’ with McDermott through the bullets and the sparks
Always with the smart remark, your eyes blazin’ and blue
But when we needed confidence we always turned to you
And when they shot our leaders up against Kilmainham wall
You were there beside us in that awful Easter dawn
Hey, big fellah……….where the hell are you now
When we need you the most
Hey, big fellah……….c’mon

Tabhair dom do lámh
(Give me your hand)

Back on the streets of Dublin when we fought the black and tans
You were there beside us, a towerin’ mighty man
And God help the informer or the hated English spy
By Jaysus, Mick, you’d crucify them without the blinkin’ of an eye
Still you had a heart as soft as the early mornin’ dew
Every widow, whore and orphan could always turn to you
We beat them in the cities and we whipped them in the streets
And the world hailed Michael Collins, our commander and our chief
And they sent you off to London to negotiate a deal
And to gain us a republic, united, boys, and real
But the women and the drink, Mick, they must have got to you
‘Cause you came back with a country divided up in two

We had to turn against you, Mick, there was nothin’ we could do
‘Cause we couldn’t betray the republic like Arthur Griffith and you
We fought against each other, two brothers steeped in blood
But I never doubted that your heart was broken in the flood
And though we had to shoot you down in golden Béal na Blath
I always knew that Ireland lost her greatest son of all.