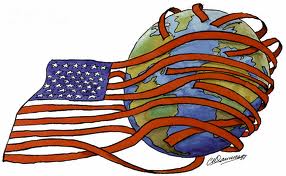 In the year 2013, the U.S. Empire rumbles on under the leadership of its murderous drone missile president Barack Obama. This man, representing his corporate/military puppeteers, is leading the everyday ordinary Black, White, Brown, Red, and Yellow people of this nation to almost certain ruin. Sadly, he has become the de facto Emperor and bloodletting chameleon of the U.S. Empire. His policies are soaked in the hypocrisy, misery and blood of the ordinary, struggling people of this nation and throughout Mother Earth.

Repression, against the ordinary people of the United States, in the form of the Orwellian NDAA (National Defense Authorization Act), TSA (Transportation Security Administration) outrages, and the destruction of Constitutionally guaranteed civil liberties and human rights, etc. has taken on heretofore unknown proportions in the year 2013 of this 21st century.

Meanwhile, as written in a recent memo from the Center for Constitutional Rights (CCR), “January 11, 2013 marks the grim eleventh anniversary of the opening of the internment camp at Guantanamo Bay, where 166 men remain deprived of their freedom, most without charge. It is now President Obama’s second term, and we demand that he finally meet his unfulfilled promise to close Guantanamo by releasing the men he will not charge and by giving fair trials to those he will…It is past time to shut down Guantanamo. It is urgent. It is ethically and legally necessary…The Obama administration has not only failed to exercise the leadership required to close Guantanamo, but it has also extended some the worst aspects of the Guantanamo system by continuing to use illegitimate military commissions to try some suspects, and by blocking accountability for torture.”

The existence of the Guantanamo U.S. torture chamber is not only utterly reprehensible, but it virtually guarantees the intensification and continuation of the spiral of hatred and ‘terrorism’ that Barack Obama and the corporate-controlled U.S. Government feign that they are desirous of abating.

Moreover, what is being done to those in Guantanamo has, in reality, been legally codified in the most odorous aspects of the NDAA of 2013, signed by Obama, to be used by the government against U.S. citizens right here in this very nation.

No person who maintains his or her own extrajudicial ‘kill list,’ as does Barack Obama, can be considered anything but a hypocrite and a bloody murderer. What this government does to people in other lands – it will not hesitate to practice against its own citizens and other residents within the borders of this nation. Pretending otherwise is a recipe for political and personal disaster.

As Obama’s drone missiles continue to massacre people in other lands, all in the fallacious name of the people of this nation – our political, economic, and social rights have been immeasurably eroded, quite possibly irreparably so. “The clash between the oppressed and those who do the oppressing” is rapidly coming home to roost in this country, and this clash is not – as Malcolm X correctly noted, “based on the color of the skin.”

In due course, the complicity with and the horrors of, U.S government sponsored mass murder and the concomitant annihilation of the human rights and national sovereignty of persons in Afghanistan, Pakistan, Palestine, Yemen, Libya (North Africa), and Somalia (East Africa) will have to be answered for by the people of this nation. These crimes are being committed in our name and we cannot be exempted from them by claiming ignorance.

We, the people of the United States, must regain our humanity by exposing and throwing off the yoke of the corporate-owned Barack Obama and his Democrat and Republican cohorts. ‘Emperor’ Barack Obama’s ‘gifts’ of  Guantanamo, drone missiles, Afghanistan, and the NDAA must be refused and denounced by the everyday Black, White, Brown, Red, and Yellow people of this nation.

The time for hypocrisy has ended! The leadership of the phony left/right divide in this country must be held accountable and replaced by the collective and genuine leadership of the everyday ordinary people. At stake is the future not only of the this nation, but also of humanity and Mother Earth herself. It can no longer be tolerated that the killing of one person be deemed as murder while the killing of 100,000 persons is deemed as foreign policy.

The time has come for REAL change, SYSTEMIC change – and only we the people can make it happen. “The clash between the oppressed and those who do the oppressing” is here and now!