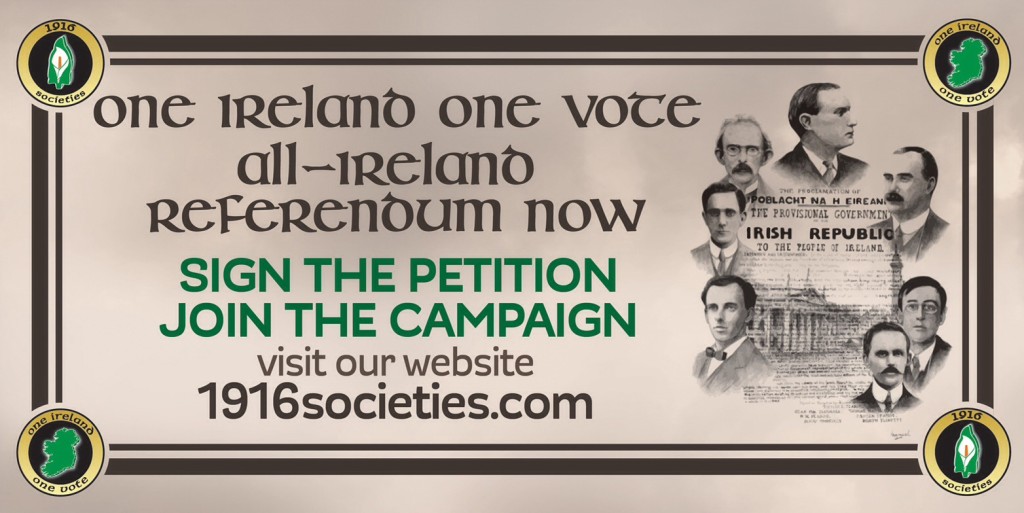 Following our recent Spring Conference – with the Centenary of the Rising and the Proclamation of the Republic now less than 12 months out – the 1916 Societies consider the coming weeks an opportune moment to officially launch our ‘One Ireland One Vote Petition’ – an integral feature of our campaign for a 32-County referendum on Irish Unity, a campaign that seeks to restore the democratic right of the Irish people to determine their own affairs.

With a rising consciousness gathering pace throughout our country, married to a realisation the political situation in Ireland remains one of abject and perpetual failure, the appetite for a new democratic engagement that might address that failure, in turn fulfilling the wants and needs of the people, grows stronger all the while, coming more into focus with every passing week.

People North and South – whether from Dublin, Belfast, Tyrone or Kerry – are fed up with the legacy bequeathed them by Britain’s partition of Ireland, a legacy that frustrates the will of the people and stands as an enduring obstacle to their national rights. They are fed up with a failed political system that serves the needs and interests of the powerful at their expense and are looking for an alternative.

For the 1916 Societies that alternative is a free and open, single-constituency all-Ireland referendum, to determine future constitutional arrangements for this country. We have a vision and a strategy for Irish freedom which is gaining traction, as people search out progressive alternatives to the existing establishment, its many limitations and its way of doing politics.

With that in mind, we intend re-focusing attentions on our One Ireland One Vote Petition, an initiative we believe can act as catalyst for a new beginning to the unfinished republican project. We consider this a first-step towards facilitating the democratic wish of the Irish people to live freely in a society of their own making and with a future they choose for themselves.

It is our belief that partition, and the establishment which it upholds, can be successfully challenged. We foresee a new debate, among ordinary people, about how a functioning all-Ireland democracy can be achieved. We believe this will complement other discussions ongoing throughout our country, as people take to the streets to oppose austerity and demand a decent standard of living. A meaningful debate around the core issues of Irish democracy and the future of the Irish people is long overdue.

If the people of this country were to realise the value in a truly independent republic, how all their wants and needs, material and spiritual, could be met in such an arrangement, then if they were to demand the republic – together in solidarity as the sovereign people – then nothing they could do, ‘nothing in their whole imperialist arsenal’ to paraphrase that famous fighting son from Twinbrook, could possibly stand in our way.

We appreciate the difficulties involved in rolling out such an initiative. However, the potential impact is immeasurable if sufficient support can be generated. Activism in the form of collection of signatures is open to everyone; Petition-forms and notebooks are available by contacting the Societies. We invite everyone to take ownership of the Petition and ask only that signatures collected be faithfully returned to ourselves at the 1916 Societies.