The conviction and sentencing of paedophile John Smart will no doubt receive a bit of news coverage not only because of his horrific abuse of vulnerable children but also because of his links with the Conservative Party. Smart was a candidate for the Tories at the 2003 Scottish Parliament elections. It has also been pointed out that Smart was also previously a candidate for Ian Paisley’s Democratic Unionist Party. What has so far remained unreported is this paedophile’s links to the Orange Order and the Freemasons.

John Smart was one of the Edinburgh based Loyalists who used to protest at the annual James Connolly march. He was also one of the few loyalists who would turn up to protest at various other republican or Irish community events in the city over the years. When the James Connolly Society stood in the 1994 local elections loyalists decided to follow our canvassers about. Among those who briefly engaged in this pointless activity was someone who was later named as the UVF’s Scottish commander and another who later became Deputy Grand Master of the Orange Order in Scotland. Much of this loyalist surveillance activity was undertaken in John Smart’s car.

During the period of these loyalist activities John Smart was not one of their hangers on and was invariably in the company of the leadership of Edinburgh Loyalist Coalition (a front group for members of the Orange Order, the BNP and loyalist paramilitaries). The most prominent member of the Coalition and its spokesman is, like Smart, a self proclaimed preacher. He is also one of Scotland’s most senior Orangemen and a leading member of the Freemasons. 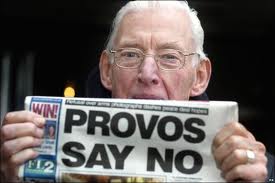 According to the Scotsman John Smart used to ‘boast of his relationship’ with Ian Paisley. The nature of this relationship is not disclosed. Paisley has been a frequent visitor to Edinburgh to visit his mother, who lived in the city for many years. The relationship between these various strands of unionism (Orangeism, Loyalist paramilitaries, far right groups and political parties like the DUP and Tories) is fascinating and paedophile John Smart had a foot in every camp.