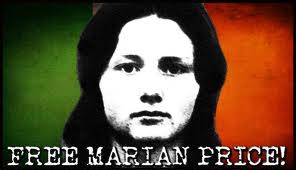 Marian Price has been imprisoned in Northern Ireland for more than a year on the basis of secret evidence neither she nor her lawyers have been allowed to see. She is effectively interned without a trial, sentence, or release date.  Unless the courts intervene, she will only be released by order of a British Cabinet Minister, Owen Paterson, the Secretary of State for Northern Ireland.

Twice she has been arrested and brought before a non-jury Diplock Court. Twice a judge ordered her released on bail.

Each time Owen Paterson overruled the judge and ordered her back to prison. He said that he was revoking her license (parole in American terms) because he had “confidential information” against her. This “information” could only have come from MI5.

In May 2011, she was charged with “encouraging support for an illegal organization” after she held up a piece of paper from which a masked man read a statement.  Northern Ireland must be one of the very few places where holding up a piece of paper can constitute a crime.

On May 11, 2012, almost exactly a year after these charges were filed, they were dismissed because the British government hadn’t produced any evidence. But Marian Price remains in prison.

In July 2011she was charged with “providing property for the purposes of terrorism”. She was accused of giving a cell phone to someone who participated in the killing of two British soldiers. She had been questioned about this and released 18 months before being charged. Her solicitor, Peter Corrigan, told the BBC that there was no new evidence against her.

Once again she was released on bail, and, again, Owen Paterson said he was revoking her license and ordered her back to prison.

But Marian Price and her legal team insist that she was never actually on license. They say that after being convicted of IRA bombings in Britain, she received a full royal pardon (the “Royal Prerogative of Mercy”) when she was freed in 1980 after she appeared to be on the brink of death from severe anorexia nervosa.

The British Government now says the pardon “cannot be located” – that it has been lost or shredded and that no copy exists.  Peter Corrigan told a public meeting in Belfast that this is the only time in the entire history of the Royal Prerogative of Mercy that a pardon has gone missing. The veteran Irish human rights campaigner Mgr. Raymond Murray said that “You can draw your own conclusions.”

There is good reason to be concerned about Marian Price’s health and well being. She was unable to appear in court on May11th, even by video link. Prison doctors have said that she should either be in a hospital or home with her family.

Marian Price’s health was permanently damaged when she was force fed over 400 times while on hunger strike in a British prison. She described the force feeding in an interview with the Dublin magazine The Village. “Four male prison officers tie you into the chair so tightly with sheets you can’t struggle. You clench your teeth to try to keep your mouth closed but they push a metal spring device around your jaw to prise it open. They force a wooden clamp with a hole in the middle into your mouth. Then, they insert a big rubber tube down that. They hold your head back. You can’t speak or move. You’re frightened you’ll choke to death.”

Marian Price’s husband, Jerry McGlinchey, said in an interview with “Radio Free Eireann” on WBAI, the New York Pacifica station, that he is “very, very worried” about her health. He says she never recovered from the force feeding which caused tuberculosis that had to be treated as recently as 2010. The anorexia has returned and she suffers from such severe arthritis that she can’t even open her hand.

McGlinchey believes that her health will get steadily worse as long as she is in prison. He said that “My fear is that Marian will slip into a deep depression that it would take her years to come out of. I believe that is what the government intends.”

Her prison conditions have contributed to the decline in Marian Price’s health. Male prison guards shine a flashlight in her eyes throughout the night. Protestant prisoners in nearby cells sing anti-Catholic songs at the top of their lungs all night long, making it impossible for her to sleep.

Very few people agree with Marian Price’s politics. She is a “dissident” Irish republican who believes in the necessity of an armed struggle to end British rule. Nevertheless the Irish Congress of Trade Unions and the two major nationalist parties in Northern Ireland, Sinn Fein and the Social Democratic and Labor Party, have all called for her release.

But what is at stake is more than Marian Price or her politics. The Irish civil rights leader Bernadette Devlin McAliskey has said that her treatmenrt, “Is a clear signal to everybody who is not “on board”  and who is not of the same mind as the government: that no dissent will be tolerated. No dissent will be tolerated and you challenge the status quo at your peril.”

This article first appeared on Counterpunch and the original can be viewed here.