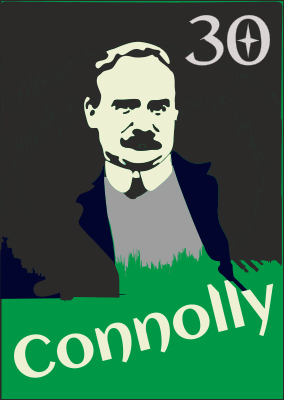 A correspondent has written to us asking whether there is not a great similarity between the position and actions of the Irish Volunteers of our day, and that of the Volunteers of ’82. He points out that the Volunteers of ’82, despite the eulogies lavished upon them by the writers of Irish history, were a ghastly and inglorious failure, and that they were so because they lacked the revolutionary quality. They had England at their mercy, and feared to strike, but when England had them at her mercy she struck without hesitation and without scruple.

The comparison is good, but not perfect. Indeed, no comparison is ever perfect. All comparisons and analogies from history fail in some degree, or at some point. If the circumstances are the same the characters of the actors are different; if the characters of the actors are the same the circumstances are different. Usually there is alike a blending and a dissimilarity on both essentials.

A great socialist writer, Karl Marx, has said that history repeats itself – once as tragedy, and once as farce. We suppose that the real explanation of the supposed tendency of history to repeat itself lies in the tendency of human beings to imitate whatever action has impressed itself much upon the imagination, just as in a company of individuals we generally find some persons almost unconsciously imitating the mannerisms of any obtrusive personality in the group.

Take any great historical crisis, and you will find that whenever a similar crisis arises thereafter there will develop amongst the minor actors in the latter a tendency to pattern themselves after the outstanding figures in the first. And a still greater tendency amongst the unthinking multitude to insist upon all the actors in the second crisis being invested with all the merits and demerits of their forerunners.

Despite their enthusiasm for Ireland the greatest section of Grattan’s Volunteers became active members of the yeomanry who afterwards achieved notoriety for their crimes against Ireland, just as a considerable section of the Volunteers of our day have become soldiers of the English army – active agents of the military army of the oppressors of their country.

A poem written at the time of Grattan’s Volunteers and the United Irishmen somewhat scathingly refers to them in the following manner:

And our correspondent seems to infer that in this respect history is again about to repeat itself. We respectfully differ with him. We can see no real analogy between the Volunteers of Grattan’s time, and the Irish Volunteers since the split. Up till that period the analogy was perfect. Up till that time the stage was set for just such another betrayal, for at least just such another fiasco. But we cannot see that the present leaders of the Irish Volunteers can at all be compared to the crowd of aristocratic, clerical and capitalist reactionaries who steered the Volunteers of ’82 to their destruction.

Nor, and this is even more important, is it at all conceivable that the rank and file of the Irish Volunteer movement could be betrayed as were their forerunners. These Volunteers of ’82 were in reality English colonists with a distinctly anti-Irish upbringing and mental outlook. Their enthusiasm for Ireland was the enthusiasm of settlers for their new home, against the government in the home they had left. If they were hostile to English influence they were still more hostile to the vast mass of the natives of Ireland. They considered themselves as British subjects in the first place, and only as Irishmen in the second place. Their appeal was to the traditions of the British Empire, and to the memory of the ‘glorious Revolution’ of 1688 – the Revolution that set King William III upon his Irish throne. Irish traditions, Irish heroes, Irish martyrs for freedom, all, all were alien to them, and therefore their betrayal by their leaders was not in their eyes a national betrayal, but only an aristocratic defection in a struggle of two parties within the British Empire. If you grasp that fact clearly enough you will understand why, despite our own criticism of what we deem their lack of vision, we yet refuse to accept our correspondent’s comparison as we regard it as unjust to the leaders of today.

The present-day leaders of the Irish Volunteers do undoubtedly hold allegiance to Ireland as their first and most sacred duty. They are not merely dissatisfied subjects of the British Empire, they are dissatisfied to be subjects of the Empire at all. Among them there may be some who hold that to have a Volunteer force at all is enough of a gain for one generation; there may be others who like to play at soldiers but shrink from the reality, and there may be others who were never more than wire-pullers, and who have brought their wire-pulling propensities into their new conditions. No organisation can hope to be quite free of such undesirables, nor even sure of being able to recognise them.

But the one certain mark to distinguish the Irish Volunteers of today from their forerunners is the fact that in their allegiance they set Ireland first. Given that, and all other things can be forgiven them. True, the presence upon their Executive of some of the men who voted the betrayal to John Redmond and his party is a standing invitation to suspicion and distrust. These men were either false to their trust, or incapable blockheads. In either case they should have been sent back to the obscurity and harmlessness of private life to live under suspicion or pity the remainder of their days. To place them again in power was to forfeit the complete confidence of the people in a time where complete confidence was necessary. Yet we have heard demands for absolute trust and confidence in a body some of whose trusted members have already abused that trust so vilely.

But granting all this the point remains that the Irish Volunteers of our time have that great quality the want of which betrayed their predecessors. That quality is: complete faith in their own country, complete confidence in her destiny to be a nation, and complete reliance upon the power of Ireland to survive all the shocks an adverse fate may bring upon her.